How to photograph treat catches (action in studio!) 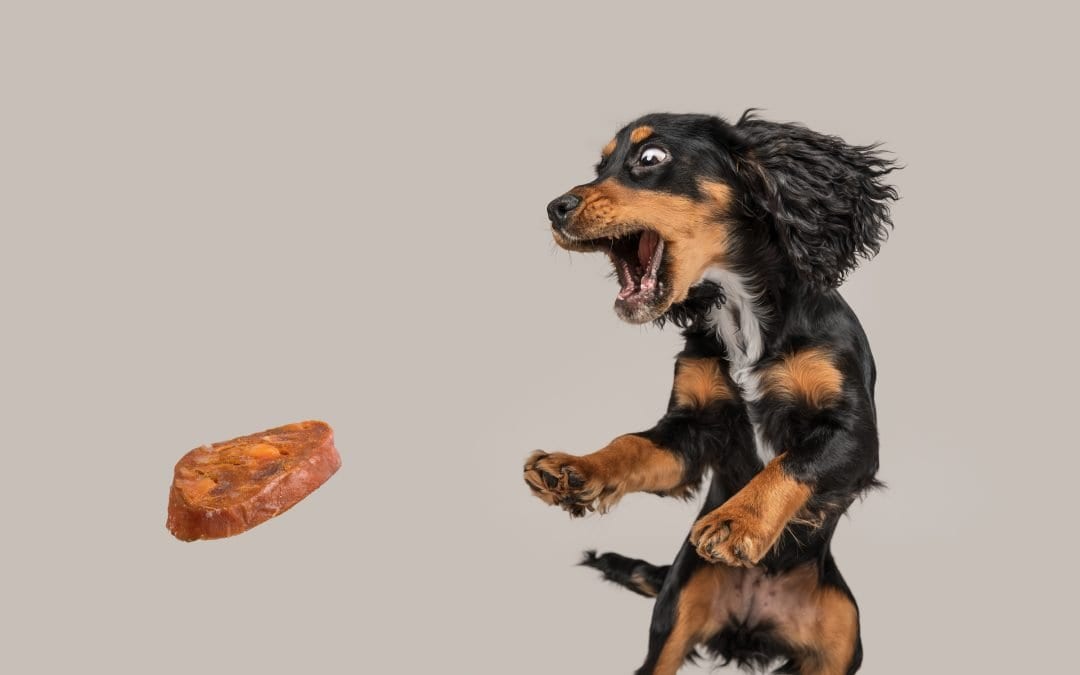 This one is a hot request in The Request Box so we dismantled our entire dining room to be able to film the how-to video for it – we’re going to go through how to freeze action in studio for how to photograph treat catches!

There is a video on this topic which runs through, in detail, how to shoot this using the non-HSS (high speed sync) method. This uses the flash itself to freeze action and can be found here:

In this post, I’m going to recap the non-HSS method (from the video) and also cover briefly the HSS method just in case your flashes do not have a short enough T1 value.

How to photograph treat catches without HSS

The grounding principle of this method is that the flash itself, its duration in time that it exists, will freeze the action in studio. What we mean by that is that with an entirely black scene without the flash, it doesn’t matter what the cameras shutter speed is, because the flash will only illuminate something in the scene for literally a split second. Anything that light touches will be illuminated for a millisecond, and that brief illumination is what will be recorded by the camera.

Read that again if it made no sense!

So the important things to get this right are:

Let’s look at these:

The flash has a short enough flash duration

This is the single most important part of the theory and set up for this method. Every flash has a different flash duration, and at full power the flash will have a different duration to half power. You need to find your flash duration for your strobe or speedlight now.

You want to be looking for the T1 or the T5 value. This is just a measurement of time on the flash and although the T5 looks a lot faster than the T1, it’s actually just a fraction taken out of the T1 value. Quick explanation:

To work out the T1 of a T5 figure, if you roughly times it by 3 (divide the number after the 1/ by 3), you’ll be pretty close. This can be confusing, because 50% x 3 is not 90%, but don’t panic, it’s because the first part of the flash is stronger and shorter than the residual light that holds for a little bit longer.

Let’s look at some examples from a quick Google search:

Remember at this point that usually the lower the power on the flash, the shorter these durations get. So it’s safe to assume that that Elinchrom strobe would be able to freeze action at maybe half power, but not full.

Profoto B10s have two settings, a “normal” and a “freeze”. In the manual, you can see this table which handily tells us the flash duration at each power setting. Using the table below, and using the strobe here on the Normal mode, what power (Energy (scale)) do we need to be using to achieve a flash duration of above 1/2000s?

If you answered 5.0 you are correct! So at the 5.0 setting, the profoto B10 on normal mode will be able to freeze action in studio. On the Freeze mode, you can use it at 8.0 – a much more powerful light source.

What about my lights? Well, I have used the B10s from Profoto, and I opted for something technically similar, the Godox AD600 Pro strobes. These have the following T1 values:

With our knowledge of the flash duration gathered, and the understanding that the flash freezes the action, it should be clear now that any ambient light (light not from the flash) is bad. It’s going to allow our camera to see things, and therefore what can you do?

You WILL need light in the room to be able to focus quickly and accurately, but if you can block off harsh window light falling on the backdrop, this will help. Use your strobes modelling lights to focus too, just make sure they drop off before the flash fires.

You need to alter your camera settings, using the exposure triangle theory, to create a completely black image before you turn your flash on. Switch to Manual mode and get your settings ready:

Each camera make and model will have its own sync speed. The maximum shutter speed that the camera can work with the flash. If you don’t know yours, use 1/160s or just google it. The Nikon D800 can sync up to 1/250s, but really the shutter speed here isn’t important, as long as you don’t go over it. So, set your shutter speed first, and then don’t touch it.

With the shutter speed set, next set your ISO. Your ISO is the sensors gain, so it will impact the exposure here. I prefer to shoot studio at ISO 100 or ISO 200. So set your camera to somewhere around there to start.

Next, Aperture. Aperture is your main control mechanism for exposure switches away from the flash power. In Studio I usually set my aperture to f8 to start with. For a completely black sceen, it’s normal to hit f11 though.

With your shutter speed, ISO and aperture set, take a test shot of the scene. In the review screen, try to flick to a display that either shows the histogram or the shadow clipping. With shadow clipping, the entire screen should be flashing. If you can see something, increase your f-number and take another shot. Continue until the screen is completely black, no data, all flashing.

Then, turn your lights on. Adjust the flash power (keep in mind the flash duration!) to achieve a good in-camera exposure. That’s the settings sorted.

The flash cannot bounce around too much to elongate its lifespan

We discussed this before, so just to remind you – try to avoid reflectors when shooting this type of shot. Big white walls and ceilings also can work against you!

You have great timing!

With the light taken care of, all that’s left is to shoot. You need to have a continuous focus method on, pretty much what we’d use outdoors to photograph dogs running, but set your drive mode to a single photo. It’s your job to perfect your timing to capture that single frame at the right time.

If you’re seeing motion blur, assess the flash duration, the ambient light and any reflections. It will be one of those things.

How to photograph treat catches with HSS

If your lights have a crappy T1 value but they have HSS, you can still do this type of shot. You need to forget everything I’ve said above about shutterspeed and ambient light, and instead, turn HSS on, ramp your shutter speed up to a safe “action speed” (1/1500s for example) and perfect your exposure in camera. I would do everything else the same as above!

I know that this seems so easy, but honestly learning and practicing the non-HSS method will help you in your career as a photographer because the theory is really very valuable to know in different shooting scenarios. So if you can, at least learn the theory, then if you ever need it, you’ll be all set and good to go.

As you can see and just like normal in photography, there is more than one way to skin a cat (it’s a saying, I promise). Using either of these methods, applied correctly and with practice, will allow you to shoot things like this. Happy snapping!